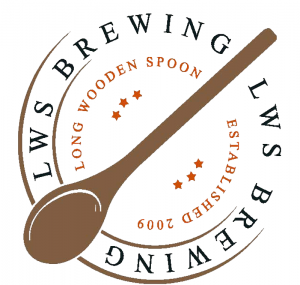 Ever tried a Green Chili beer? How about a Pumpkin Porter brewed from locally grown pumpkins in Floydada, TX?

Maybe you don’t have a favorite…but head into Amarillo’s first brewery, Long Wooden Spoon Brewing…and you’re sure to find a fresh brew that hits the spot.

This month, we met with owners Jared and Kim Read to learn about the ambition behind launching the crafty and independent brewery that’s worth all the hype. 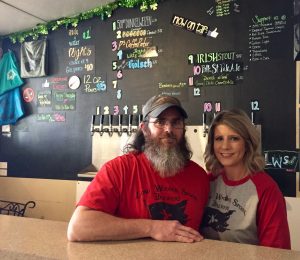 Like many small businesses, Long Wooden Spoon Brewing originated from a hobby, in Jared’s garage. “Kim bought me an in-home brew kit in 2008,” explains Jared, who has a degree in Chemistry from WTAMU.

“With lots of trial and error, taste-testing, and research, we opened our taproom at 4098 Business Park Drive. In 2014, we had 4 beers on tap…and now we’ve got 21, with a growing demand for more!”

Jared goes on to say, “Brewing beer is a lot like cooking. Sometimes flavors work together, sometimes they don’t.”

Kim adds that each beer has its own style. “There are challenges in finding the right yeast for each brew, but we won’t put out a bad beer.”

With beers ranging in style from 6th Street Wheat, Chocolate Stout, and P3 Coffee Porter (made with coffee from Amarillo’s Evocation Coffee), LWS offers an old-school taproom environment with quality beer. For a list of LWS beers, follow this link. 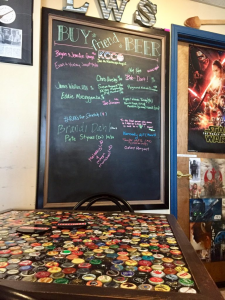 “It’s funny, no one really has a favorite here. When we recommend a new beer, it seems to be just a popular as the last,” says Kim.

It’s evident that the taproom is the go-to, as men and women are coming through the door, one right after the next, to order a craft beer and grilled cheese.

Not only do Jared and Kim run a top-notch brewery, but LWS is highly involved in supporting community events, such as The 100 Club, Camp Agape, Pints for Pups, and more.

In 2018, keep your eye out for Long Wooden Spoon bottles in liquor stores and restaurants. And if you haven’t had the chance to taste a LWS beer at local events, or attended any of their many popular events like St. Patty’s Day, Star Wars “May the Fourth Be With You,” crawfish boil, or movie/trivia night…you’d better get down there before the place is full! 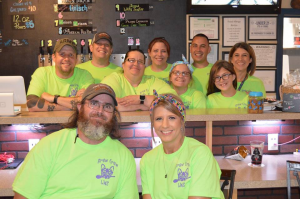